You are invited, to meet the expert of mobile applications and multilateral security,
personal security assistants and services and IT security evaluation and certification
and learn more about how to avoid the Big Brother Problem. 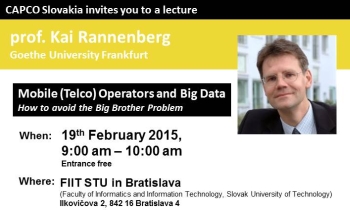 Internet and telecommunication applications become more and more personal, which raises major privacy problems. One example is the trend towards more and more identification of Internet users (such as social network participants) leading to federated identity management systems based on credentials that a relying party needs to check to get assurance on requesting users.
This presentation first introduces ABC4Trust, a European Union funded project to achieve the federation and interchangeability of P-ABC technologies including an integrating architecture and two pilot applications for a school’s communication system and a university’s course evaluation facility.

Kai Rannenberg holds the Deutsche Telekom Chair of Mobile Business & Multilateral Security at the Goethe University in Frankfurt since 2002. Before he worked at Microsoft Research Cambridge, UK focussing on "Personal Security Devices & Privacy Technologies".
Kai studied at the TU Berlin and received his PhD at Freiburg University where he then coordinated the interdisciplinary "Kolleg Security in Communication Technology", sponsored by Gottlieb Daimler & Karl Benz Foundation researching Multilateral Security.
Since 1991 Kai is active in the ISO/IEC standardization of IT Security and Criteria and since March 2007 in Identity management and privacy technologies.
He chairs IFIP TC-11 "Security and Privacy Protection in Information Processing Systems". Kai chairs the Legal & Security Issues Special Interest Network of the Council of European Professional Informatics Societies (CEPIS) since 2003.
In July 2004 Kai was appointed as academic expert to the Management Board of the European Network and Information Security Agency, ENISA.
Kai`s awards include the IFIP Silver Core, the Alcatel SEL Foundation Dissertation Award and the Friedrich-August-von- Hayek-Preis of Freiburg University and Deutsche Bank.