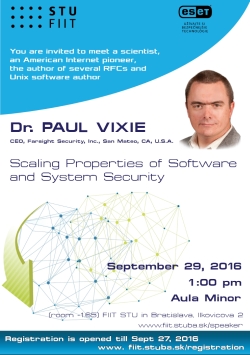 Humanity has been building and programming general purpose computers for about six decades now, with spectacular results, mostly good. As we contemplate the Internet of Things in light of our collective experience, there are some disturbing conclusions to be drawn. Can we as a species safely place our economy and culture into a global distributed network of computers, if those computers are programmed by humans using commodity programming languages and tools? Dr. Paul Vixie is personally responsible for more CERT vulnerability notifications than any other living programmer, and he'll share his thoughts on the likely results of Software as Usual as applied to 21st century society.