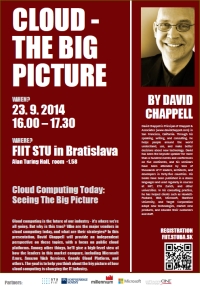 You are invited, to meet the cloud expert and consultant,
who helps people around the world understand, use and make better decisions
about new technology.

Cloud computing is the future of our industry - it’s where we’re all going. But why is this true? Who are the major vendors in cloud computing today, and what are their strategies? In this presentation, David Chappell will provide an independent perspective on these topics, with a focus on public cloud platforms. Among other things, he’ll give a high-level view of how the leaders in this market compare, including Microsoft Azure, Amazon Web Services, Google Cloud Platform, and others. The goal is to help you think about the big picture of how cloud computing is changing the IT industry.

David Chappell is Principal of Chappell & Associates in San Francisco, California. Through his speaking, writing, and consulting, he helps people around the world understand, use, and make better decisions about new technology.

David has been the keynote speaker for more than a hundred conferences and events on five continents, and his seminars have been attended by tens of thousands of IT leaders, architects, and developers in forty-five countries. His books have been published in a dozen languages and used regularly in courses at MIT, ETH Zurich, and many other universities. David has also been a Series Editor for Addison-Wesley and a columnist for several publications. In his consulting practice, he has helped clients such as Hewlett-Packard, IBM, Microsoft, Stanford University, and Target Corporation adopt new technologies, market new products, and educate their customers and staff.

David's comments have appeared in The New York Times, CNN.com, and many other publications. Earlier in his career, he wrote networking software, chaired a U.S. national standardization working group, and played keyboards with the Peabody-award-winning Children's Radio Theater. David holds a B.S. in Economics and an M.S. in Computer Science, both from the University of Wisconsin-Madison.